We have been doing lots of research and reading a lot of full timing RV articles. We both like to research everything before we take the big leap. That comes with maturity and some bad experiences! 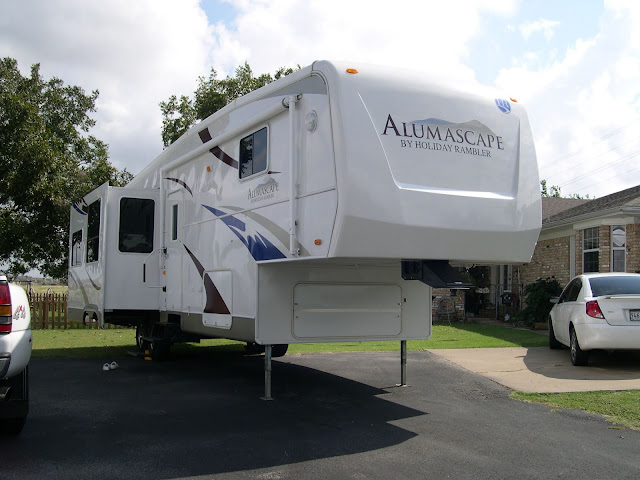 We have planned a camping trip for this weekend at a local campground so we can spend some time alone with the fifth wheel. We have only camped a few times since we bought it and have had people with us.


This is a weekend to better learn the rolling condo inside and out. I am still amazed at all the room this fifth wheel has compared to the motor home. There is only two foot of difference in the length. 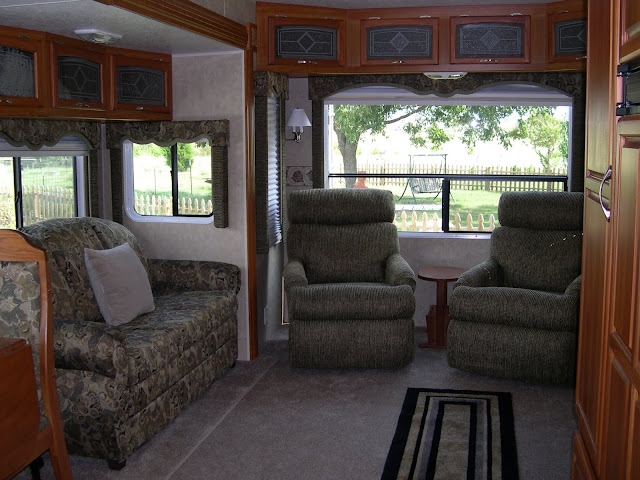 I for one love the desk area and all the windows.
Email ThisBlogThis!Share to TwitterShare to FacebookShare to Pinterest

We have spent the last week looking for a good used truck that would pull this thirty-five foot fifth wheel travel trailer. I believe it was Dawn that said, it won't be difficult to find a good used truck.

Well, we have spent every waking moment looking through the newspapers, Internet and driving through car lots. We have made a lot of new friends (salemen) along the way!

We have done it by the book. We bought the trailer we wanted and now we are in search of the truck to pull it.

It is recommended by the dealership that we buy a one ton truck. OK, Now we have a few additions to that. We need a one ton truck that will pull the trailer and accommodate at least four adults comfortably. It has to have low miles and look good too.

After a week, we are thinking this is no easy task. We were starting to panic!

One dealership we stopped by had a saleman he had just what we were looking for and it was just gently used. I couldn't believe my eyes when we walked up on this truck that didn't have a window in without a crack and the mirror on the drivers door was hanging on by a thread. He said he thought the tail gate was on the lot somewhere. He said it wouldn't be too expensive to replace the windows if that was something that we thought was necessary!

Young Chev on I-30 in Dallas is were we finaly found our truck. It is a 2004 Chev, Silerado 3500.
Wow! It is nice, it's clean, low mileage with a large crew cab.. This truck is fully loaded. It is way more truck then we had planned on. He cranked it up and told us to take a drive while he looked over our trade in.

I have only driven a dually one other time so this will be interesting! This truck drives like a dream and is loaded with all the bells and whistles.

Now we are once again excited!
Email ThisBlogThis!Share to TwitterShare to FacebookShare to Pinterest
Newer Posts Older Posts Home
Subscribe to: Posts (Atom)