In Review Our Experience as COE Gate Attendants

Our experience as US Army Corps of Engineers gate attendants has been interesting to say the least. There are many pros and cons to the gate attendant job here at Lavon Lake.

We’ve made a lot of new friends and have learned a lot.

Lavon Lake COE provides their gate attendants with a nice level concrete site with a metal cover, full hookups and a storage building. 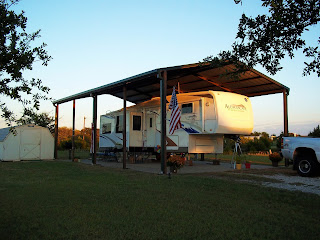 We bought a lawn mower and a weed trimmer while we’ve been here. The mowing contractor only mows the parks a few times a year. The volunteers mow a few times. The weeds and grass here can easily grow 3 to 4 feet in a short amount of time. 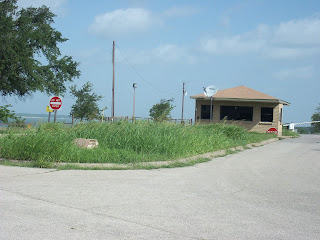 We don’t like sharing our RV with mice and snakes so we mow our site and our fellow gate attendants’ site.

I wouldn’t plug our RV up to the electric pedestal without having a surge protector. The power in the park is questionable at times. We’ve seen many a melted power cords during our stay here.

We’ve had some concerns about the water here. At times the water smells and feels slimy. This would indicate a lack of chlorine. That was confirmed recently by the water supplier that said there was no chlorine in the water in this park.

This park is on a dead end water line. Water needs to move through the lines consistently in order to keep the water circulated so it doesn’t go stagnate.

Most of the camping is closed due to flood damage so there’s not enough water being circulated to keep the chlorine level as needed.

There is a very good possibility this is the reason several of us living here have been suffering with bouts of diarrhea.

The staff here has been notified of the problem but no one seems too concerned with it.

The gate house vinyl flooring has been duct taped together in places. The flooring is loose because when it rains the rain comes in under the door and goes under the flooring. It’s very hard to keep this floor clean. 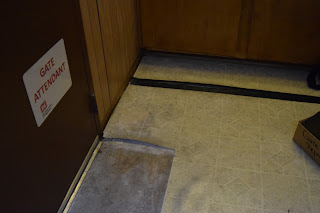 The roof has a few bald spots and needs some shingles. The roof leaks and that causes a moldy smell in the ceiling.

The exterior pole mounted security lights won’t stay on at night. It is very dark here when the sunsets. The exterior eve lights aren’t very bright and burn out often. The entrance parking lot has no lights at all. 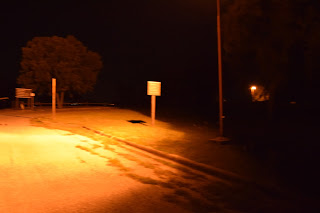 A sun film was applied to the windows a couple of summers ago and the windows weren’t cleaned first so at night it’s difficult to see out.

The five Park Rangers here are really nice guys but we rarely see them.

The gate attendants aren’t kept up-to-date on matters that involve the parks. For example I heard on the local news about a burn ban in several counties in this area. I thought I better call headquarters and asked if the burn ban included this park.

I was told that this park was included in the burn ban and that the burn ban had been in place for almost two weeks. We were told to post the Burn Ban sign in the window and to hand out the burn ban notice to all campers. 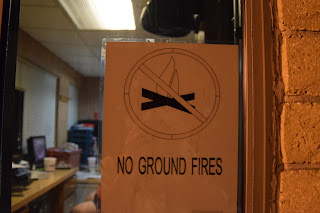 Some campers will do as they please and we had a few build a camp fire in the fire rings.
When we mentioned it to the rangers, the response ranges from it’s not a big deal to I didn’t know we were under a burn ban!

If you have a problem in the park, you can call the park ranger by phone but most likely will get voicemail.

Luckily the COE has a contract with local police to patrol the parks. It helps having a uniform drive through.

There have been several incidents where we’ve called police. We appreciate they’re prompt response.

We’ve called for a park rangers assistance and were told they were currently doing paperwork and unable to get to us or we’re told their busy and tell us to call another park ranger.

We don’t call for a park ranger often and we definitely know when we’re getting the run around.  When we do call it’s something we feel is important.

Matter a fact, I recently told a ranger that I would not be imposing or inconveniencing them again with any more calls.

Oh Well, our attitude is if they don’t care then neither should we.

We hate having that attitude. We take pride in our work. We have gotten so frustrated while working here because no one, I mean no one cares.

These parks are old and run down. There’s problems with the electric, water and the restrooms.

This park has only one restroom with showers. 1 shower stall in both the men’s and women’s.

They stay filthy. The cleaning contractor sweeps and replaces the toilet paper. Even though the restrooms are old there are a few things that could be done to make them not so scary.

A coat of paint would do wonders. The paint is peeling off in large chunks. We offered to paint them while the park was closed last winter. 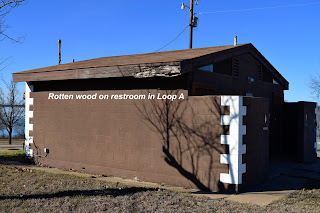 The park ranger in charge of volunteers didn’t think it was important to paint the restrooms even though he had the paint and we offered free labor.

There are spider webs everywhere. The soffits are crumbling because the wood is rotting.

There seems to be no preventive maintenance done. They wait for things to completely collapse before doing anything about it. Of course, it cost more to replace then to repair.

The restroom at the boat ramp is a pit toilet. When the lake flooded the flood water got into the pit toilets. They were opened when the boat ramp was opened. The water in the toilets was never pumped out. Now there is water almost up to the toilet seat. It’s very disgusting and people complain about it.

The other boat ramp restroom has trash in the sinks and on the floor. It’s been there awhile!

The admin assistant here is the only one that will answer her phone 9 out of 10 times and is always good to give you an answer then or get back with you shortly. We would have been lost here without her.

We’re required to submit an invoice on the first of each month. The invoice is reviewed by the Gate Attendant Ranger then the Lake Manager and then it’s forwarded to Millington, TN for payment. If you’re lucky you might get paid before the first of the following month.

I certainly don’t want to discourage anyone from becoming gate attendants. This is our honest experience and unfortunately it’s not been a great one. We just want to inform anyone interested in this kind of work what you might be up against.

My suggestion to anyone that plans on becoming a COE gate attendant would be to visit the lake and talk with a gate attendants drive through the parks and see for yourself.

We’ve visited some other local COE lakes and talked with the gate attendants. They have some complaints but for the most part they are happy with their jobs and the experiences they’ve had. So far we haven’t seen any parks that look as bad as these at this lake.

We’ve discovered it’s not just us. The other gate attendants at this lake are as unhappy as we are. They too will be looking at other lakes and parks for future jobs.

We will definitely do our research and take a good look around before bidding on any other gate attendant jobs in the future.

We’ve been here too long and it’s time to move on to our next adventure.